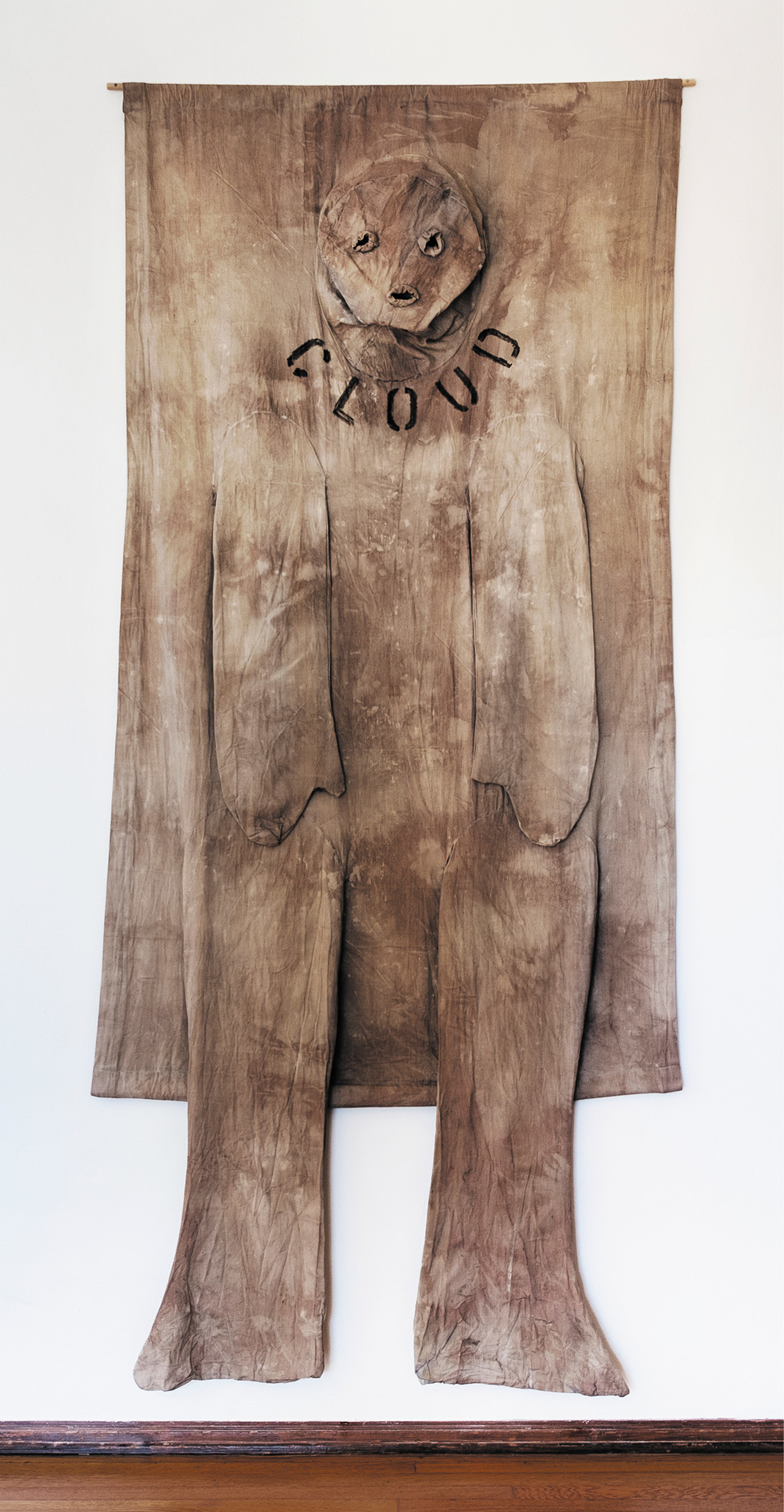 Cloud, 1974â€“78, a life-size construction by Nicola L. (1932â€“2018), is a large cotton canvas wall rectangle measuring five feet high and three feet wide. From it dangle five pockets of fabric that mimic a head, arms, and legs, respectively. This object is one of the “PenetrableÂ», 1968-2012, so named by the French art critic Pierre Restany in the late 1960s. These portable works were presented in various artistic and non-artistic contexts throughout Europe in the 1960s and 1970s by personalities such as the musician Caetano Veloso, participants in the Isle of Wight festival in 1970 and the artist’s own son. Indeed, these are paints that you can put on and animate with your body.

Cloud is installed alongside other pieces by Heidi Bucher (1926-1993) and Olivia Erlanger (b. 1990) in “Shell”, a concise exhibition of eight works at Del Vaz Projects. The exhibition’s metaphorically rich title draws inspiration from, among other things, the snail motif that frequently appears in Nicola L.’s art and Bucher’s 1972 “Bodyshell” series of wearable sculptures, which she has made while living in Los Angeles. â€œShellâ€ is a stimulating invitation to reflect on the fruitful conceptual juncture of woman/body/architecture/clothing: a particularly important set of intertwined ideas for feminist artists of the second half of the 20th century.

Most of the exhibited works are objects that involve the body but from which the body is of course absent. They invite visitors to imagine putting them on, taking them off or walking around inside. I have found they are best described as livable rather than penetrablebecause each piece offers the spectator an entrance, symbolic or literal, exploiting the shifts between to carry and lodging (like the small gap between dressthe French verb meaning “to dress” and dwell, the word for “dwell”). Located adjacent to the interior courtyard of this gallery â€“ a spacious Spanish Revival-style house in Santa Monica â€“ the domestic setting of the space provides a happy backdrop for the exhibits.

Similar to the inside of an abalone or oyster shell, Bucher’s suspended sculpture Untitled, 1978â€“81, is glazed with pearlescent pigment. To make the piece, Bucher glued a blouse with flared sleeves, frozen in glue and covered with pearlescent paint, to a large round piece of foam. While Nicola L.’s painting is wearable, the clothing employed by Bucher works differently. It is a skin once worn but now molted. In a series of works that Bucher called “Einbalsamierungen(Embalmings), 1973â€“78, she mummified personal and found clothing, including tights and nightgowns. (She made the works after leaving Los Angeles and returning to Switzerland in 1973, just two years after women won the right to vote there.) For Bucher, the clothes functioned as an evocative container of bodily memory. In a 1981 interview, she explained: â€œAt the very beginning, I perfumed my underwear myself. . . . I would also call the skin underwear, that is to say a very, very personal shell. . . . When I do that, I retain a part, a moment of my life. . . so maybe they are discarded shells, discarded skins, which are then solidified. . . to lighten them, to support them, to create a new state for me.

If the work of Bucher in this exhibition is metaphorically habitable, that of Erlanger Act I, 2022, invites the viewer to move with their eye in a dollhouse style space; the decor also looks like an eye. This diorama contains a pair of miniature doors in a plexiglass eye convex shell, all of which are placed in an eyelid-shaped frame covered with floral wallpaper. In this work, the interior of the house and the seeing body are one.

All the pieces here struck me as purposely vulnerable things. Recalling literary theorist Gayatri Chakravorty Spivak’s description of deconstructionist, feminist and postcolonial ways of thinking as a “radical acceptance of vulnerability”, these are objects offered to the viewer in a spirit of openness and curiosity.