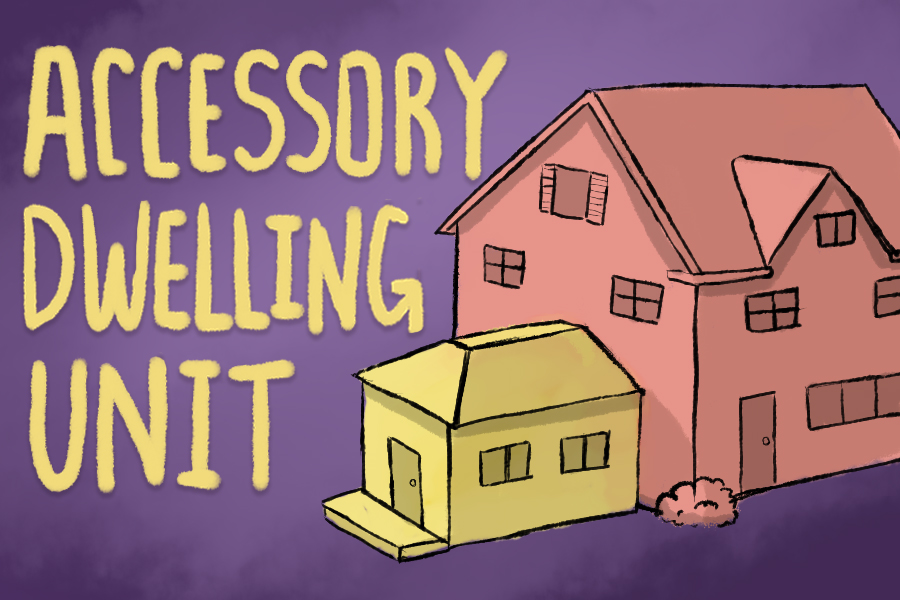 As they move into off-campus duplexes and triplexes created as accessory living units, many upper-class students negotiate the trade-off between outdoor space and the worst amenities.

At first glance, the most unique part of Weinberg junior Sarah Brown’s off-campus home on Pratt Court is the swirling, colorful paintings that adorn the wall next to her staircase.

Perhaps if Brown didn’t live on this particular Evanston street, the staircase itself – a bulky exterior addition built along the side of the house and leading directly to the second floor – would be more remarkable in itself. But on Pratt Court, Brown’s home joins a long line of duplex and triplex homes occupied by Northwestern students. These fall under civic codes authorizing accessory housing units, or small confined living spaces, in larger dwellings.

Residents and advocates have long argued that accessory housing units, or ADUs, are a particularly intense problem in areas with a high concentration of student housing. A six-month moratorium was offers on the construction of new non-owner-occupied internal ADUs in July. Ald. Clare Kelly (1st) called the developments “mini-dormitories” because of their reputation for packing student areas into the first and second rooms.

Students in the upper grades, however, are more than aware that the attics and finished basements they call home have a reputation for being very independent with very poor amenities – and for some, the balance is worth it. worth it.

For Brown, the social aspects of life in his upstairs ADU outweighed any lifestyle preferences.

â€œWe didn’t even look away because we knew our friends were down,â€ Brown said. â€œ(The house) is not ideal; a lot of things are missing. But we were sort of going to live here anyway, no matter what.

Brown’s owner renovated the floor and repainted the walls before moving in. Still, she said the age of the house was visible. The dirt and smell lingered, and she still wishes she had gushed for a house with a dishwasher.

While Brown said she probably wouldn’t have lived in a duplex on her own, sharing a space with her friends downstairs has helped the house bypass two of the biggest concerns cited by ADU opponents: noise and privacy. His house treats the downstairs living room as a chill out space for everyone, coming together to watch games and use a roommate’s extended audio system.

Brown said his roommates had received noise complaints commonly cited by families in student areas with high ADUs. But for her, the perks of having a common gathering space in the form of a backyard still justify the pains of the old duplex in her mind.

“I think I would certainly be much more reluctant to live in a duplex if I didn’t know the other people in the place and didn’t have the same total comfort with whom I speak, with whom I keep (outside ) spaces with, â€Brown said.

Ald. Peter Braithwaite (2nd) told a city council meeting in September that he hoped that with proper care and a more cohesive homeowner presence, ADUs could have a stabilizing influence on neighborhoods. For Weinberg juniors Emily Abt and Natalie Jarrett, a greater connection with their neighbors and the shared lawn was a major draw in their decision to move into a duplex on Foster Street.

“In order to be part of the community, to have the backyard that I wanted with the dog and to be with my friends, I was like, ‘Okay you know what, I’m going to pay that much for a much smaller space, ‘”said Abt.” But the number of issues with the house itself was outrageous. “

In the process of signing their Abt lease, Jarrett and their roommate were surprised by the ever-changing estimates of how many students the house could accommodate.
The trio ended up committing to dividing the entire rent for the house in three ways. Although they had enough space, they were surprised to learn that two groups totaling seven people had moved into the space the previous year.

â€œThere was kind of an attic bedroom where I don’t think you could possibly stand up straight,â€ Jarrett said.

Abt and Jarrett continued to face structural problems. Their porch was disconnected from their house, the interior door separating the two duplex units was no longer locked, and the house had issues with air quality and black mold. They were told they weren’t allowed to open their apartment windows to avoid further aggravating the mold and ended up moving out within a week.

Although Brown plans to stay in her duplex next year, Jarrett isn’t sure she’ll be living in a house again. Abt joins the multitude of Evanston residents calling for better maintenance of ADUs so that his experience is not repeated by future students.

“They will put an extra room in a house,” said Abt, “but that does not take away from the fact that the conditions the students live in are not safe for them.”