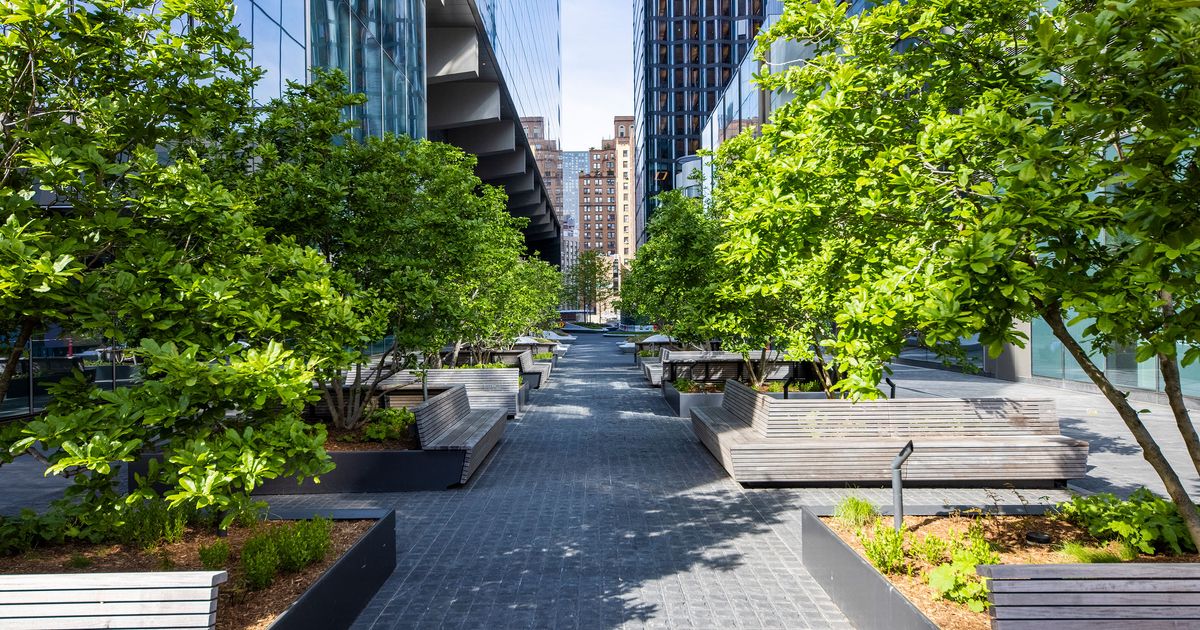 You don’t have to be too grizzled to remember when the land west of Penn Station was Manhattan’s most desolate area. The aptly named but universally forgotten Dyer Avenue formed a smoke-filled ravine before plunging into the Lincoln Tunnel. The concrete ziggurat at 33rd and 10th ave looked like a place designed to stifle screams from deep inside. (Although there was an ice rink on the roof, so maybe the howls were gleeful.) Trains passed through an open ditch before plunging into the darkness of the terminal. Life on the streets consisted mostly of windblown trash. Then the city rezoned the entire area, turning it into a huge construction site.

Beyond the polished Hudson Yards compound, there is still enough noise and sand in the air that it’s surprising to hide from West 33rd Street between Ninth and Tenth Avenues in a plaza quiet and shaded Manhattan West and having a choice of cafe tables, restaurant seats or curvy marble benches. You would never know you are sitting on a platform in the air above a node of transportation infrastructure and hazy traffic. Of course, it’s a skinny T of public space slipped through skyscrapers, a chic outdoor food court disguised as a European plaza, and a big developer’s idea of ​​where people ordinary people would like to go out. But I’ll take it! A block away and less than three years, Hudson Yards has gone from a brand new space station to an inconsolable. Manhattan West looks like a corner of New York designed with real human beings in mind.

About 15 years of manufacturing – or 36, depending on when you start the clock – Brookfield Properties’ eight-acre, $ 4.5 billion Manhattan West complex bridges the gap in mega-developments between Related Turf ( in Hudson Yards) and New York State (Moynihan Train Hall and future Facebook offices next door). The newer pocket city has two surprising strengths. The first is that somehow a high-rise complex designed largely by one company (Skidmore, Owings & Merrill) and built by a single developer (Brookfield) has emerged as a mishmash. attractive melodrama.

Two glass-skinned office skyscrapers flank the entrance to Ninth Avenue, yearning for an illusion of weightlessness, like a pair of elongated soap bubbles. (One is home to the Skadden, Arps law firm; the other is still under construction.) Like Hudson Yards, Manhattan West is effectively a living bridge. A landscaped platform spans the river from the rail below, and the giant towers resonate wherever they can. Building on train lines without shutting down the service is a monstrously delicate job that involves moving loads so that a single column landing along the tracks can do the job of five. The structure is mostly hidden behind glass curtains, but you can see its traces in the lobby of One Manhattan West, where a marble-clad base curves towards the ceiling and meets a wooden shell, echoing the large diagonals of steel inside shiny walls.

Behind these thin-skinned skyscrapers is a motley cluster of buildings. A boutique hotel, the Pendry, features an undulating dark glass facade edged with ribbons of dark brick. The Lofts salvage an ancient vestige of masonry that awkwardly hangs out with the new children and offers a brushstroke of nostalgia. A residential tower, the Eugene, is an amazing glass box full of amenities and the people who pay for them. And then there’s the ziggurat, designed by Davis Brody in 1969 as 450 West 33rd Street, then reborn and renamed Five Manhattan West a few years ago when the REX architectural firm stripped, gutted and dressed the beast. glassy ripples and zapped it in a tech center. Instead of looking like a raw elephant’s paw crushing the train yards below, he now sports a glass tutu that almost, but not quite, camouflages him in Midtown’s reflective terrain.

The variety of designs – none spectacular, all respectable – suggests a gradual architectural build-up rather than a unified grand plan backed by the kind of bravery engineering that only large corporations can afford. It’s still a corporate sham of a city, but given the history of such gestures, it’s surprising that they’ve managed to come close.

The second marker of Manhattan’s success in the west is that the public space feels like it was designed as a positive presence and not just the gray substance left between buildings. A pair of curved low-rise restaurant buildings cut across the plaza, relieving the feeling of being confined inside a high-rise corral. This move alone fixes one of the faux pas of Hudson Yards, where food life is hidden on the upper floors of an indoor mall, away from casual passers-by. Here it is spreading in public view. Tables in restaurants flock to tables in public cafes. Upstairs, bar and restaurant terraces offer views and a bit of executive-level romance, and a 160-seat theater promises shows of “contemporary variety,” whatever that means.

James Corner Field Operations designed the horizontal plane, with miniature groves and orchards, tiny gardens, grassy patches bounded by wavy travertine benches, and a central bull’s eye paved with overlapping circles. The space isn’t huge – a few acres – but it’s artfully subdivided to accommodate a variety of experiences at different times of the day: shows, lunches (including take-out from Whole Foods or Daily Provisions), chats intimate and platoons of commuters striding by.

Will these activities materialize? For now, it’s still a button-down square surrounded by empty interiors. The success of the project – and of Midtown at large – depends on the filling and generation of the daily tides of these office buildings. Governor Kathy Hochul reaffirmed her commitment to her predecessor’s plan to a pedestrian bridge over tenth avenue, connecting the High Line and Hudson Yards to Manhattan West and Moynihan Train Hall, a move that will complete the separation of the pedestrian area from the street below, starving sidewalks and fueling connected squares. Stroll along the covered walkway at the south end, under the huge concrete feet that support Five Manhattan West, and you’ll get a feel for what it would be like to continue, 30 feet above the street, to ‘at the Whitney.

In the meantime, Brookfield has succeeded in turning the ongoing construction of Two Manhattan West, the last tower facing Ninth Avenue, into an urban opportunity. Instead of erecting the usual sidewalk shed to protect passers-by from falling debris, the developer opted for a high-roofed canopy dressed with an inflated fabric ceiling, multi-colored LED lights, and an artificially man-made orchard of false lemon trees below. Like so many private managers of public spaces, Brookfield internalized the lesson from Bryant Park: packing the schedule and available square footage with events, exercise classes, concerts, screenings, and pop-up vacation shows. Manhattan West will therefore benefit from a constant stream of developer-curated entertainment, as well as ice skating in a street-level reincarnation of Sky Rink (now at Chelsea Piers). A mega cinema screen will debut soon, hanging from the facade of the Five Manhattan West.

Not all public places need to be kept busy if they are well designed; New Yorkers can make their own vitality. The only thing missing here is a place to play. Are there no children in these apartments? Designer Ryan Swanson has recommended to build moments of unnecessary joy in public spaces: not only fenced play areas or dancing water jets, but also smaller scale facilities, like benches that can be played like marimbas and climbing sound sculptures. These flourishes can also help soothe adults, adding a touch of impromptu sweetness and whimsy to well-planned days. This is the paradox of private public space in a large development: it forces a large company to figure out how to make a neighborhood appear less marked and more urban than it actually is.